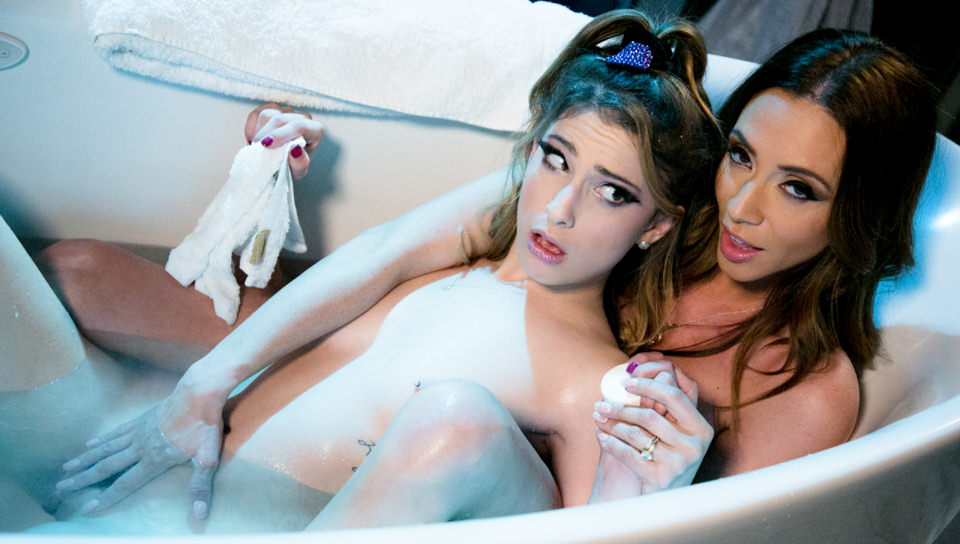 Teen Kristen Scott is grateful her step mother Ariella Ferrera brought her along to Las Vegas. Kristen wants to go party at the clubs, but Ariella prefers taking her on more cultural outings. Kristen’s hell bent on having fun and sneaks out that night anyway. Ariella waits up and busts her for disobeying when she tries to sneak back in. She’s quite displeased about the amount of makeup and body glitter she’s wearing and insists on washing it off.

Mommy Ariella runs a bath and freaks when she sees Kristen isn’t wearing panties under her short lavender dress. And she’s not exactly thrilled to see her nipple rings. She puts the teen in the bath and removes the cosmetics with a washcloth.

When Kristen gets upset defending her teen behaviour, Ariella relents. She’s feeling chilly and wants to get in the bath too. She takes off her satin robe revealing her huge tits and joins the teen in the tub. It feels a little weird for Kristen, laying back in her step mother’s arms, both of them naked in the water. But Ariella puts her at ease and starts up a heart to heart conversation. She gets Kristen to open up about whatever she’s going through as teen, like her sexuality.